The full-size truck segment is a little bit different from the rest of the automotive world. It is not so harsh with unwritten rule dictating six years of lifespan, as its stuff have a tendency to stick visibly longer with us. Still, Japanese has been testing boundaries a bit too much. Even Nissan pulled itself together to replace its incredibly dated and catastrophically slow-selling Titan, leaving all eyes resting on Toyota. It is now eleven years since current Tundra debuted and we are not here to deliver the especially good news. 2019 Toyota Tundra is nothing but another facelift a top of existing one.

Spy shots reveal test mules only with covered fascia, leaving rest intact. The front bumper also carries over unchanged, but grille and headlights don’t. Grille is differently slatted, while headlights were obviously introduced to LED technology. Whether the change of their shape, along with one of the hood, is also on the menu, is not especially clear due to the existing camo. Yet, we wouldn’t expect from this redesign to be meticulous as one in 2013 and even if it is, it wouldn’t help much. Tundra needs new generation… Especially on the inside. The cabin is cheap and dated, missing on the luxury evolution experienced by more contemporary rivals in the meantime. We don’t have any spy photos of it, but we wouldn’t be surprised if refresh in question changes nothing about it.

Current hottest topic in the world of full-size trucks is definitely diesel power. The inevitable part with Heavy Duty trucks for a long time, it managed to penetrate “regular” area recently. Trucks worship torque and nobody is generous with it as compression-ignition mills. Ram recognized that some time ago, Ford has just brought him, and we know that new Silverado is bound to house one. What about Tundra? It was a rumored couple of years ago that Cummins V8 diesel might find the way to its engine bay, but nothing happened. We wouldn’t bet that upcoming facelift could include diesel, that is probably reserved for the new generation, which should also include hybrid powertrain. That means we will have to satisfy with current naturally aspirated 4.6-liter V6 and 5.7-liter V8, both paired with a 6-speed automatic. First pumps out 310 hp and later 381 hp, while V8’s 0-60 time of 6.4 seconds trails Ford’s and GM’s offer, along with worse mpg figures in the segment.

Refreshed 2019 Toyota Tundra could debut during this year or possibly not long after next one emerges. We wouldn’t expect any price change from the current span of $31k – $51k, while the main question stands- is it worth of waiting for? As we are talking just about nip and tuck for more than decade old truck, the answer is no. The ride will remain unrefined, cabin cheap, tow and payload ratings partially inferior, gearbox sluggish and V8 very thirsty. Tweaking the lights, grille, and hood, won’t do the trick. We are left than waiting for the new generation which could supposedly arrive in 2022, probably bringing diesel engine, electric motors, 10-speed automatic and God knows what other delights. 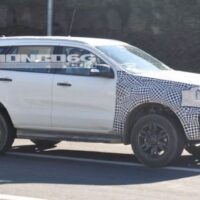