When BMW first shown its new i-brand car concepts, nobody could imagine that the concepts will become reality in such a short time. In recent times, this company has unveiled some production ready concepts, but i8 looks like it is way ahead of its time. Lets see what the production version of this model could bring new to the market.

Exterior wise, the BMW i8 Spyder will come with aluminum and carbon fiber composite plastics in abundance. The production version should come with removable hard-top, so the exterior would be no less striking than the coupe. The front bumper will have multiple surfaces overlapping to form nice, sporty, but functional bumper. The difference between the i8 and the coupe is a shorter wheelbase on the i8. The model will come with all-LED and the twin-kidneys will have neat blue borders. The model will have the scissor doors and the raked rear windshield will be replaced with more 3D surfacing and a flat deck lid.

All of the exterior panels are made of a new material, carbon fiber composite plastics. This material is strong and weighs less than steel or aluminum panels, so thanks to that model will come much lighter, providing excelent performance.

Well, as for the interior, it is very luxurious. The dashboard is lined with tanned leather and uses a new design technique called layering. The passenger-cell is made by carbon fiber reinforced plastic, providing high strength and rigidity. The seats are covered with leather giving them a more exclusive look. The center console is angled towards the driver, while i-Drive controls and drive select lever is placed on the central tunnel. The model will come with multi-functional steering wheel bespoke and the instrument cluster made up of a large display panel. The company will provide a choice to its customers between four interior themes with contrast stitching. 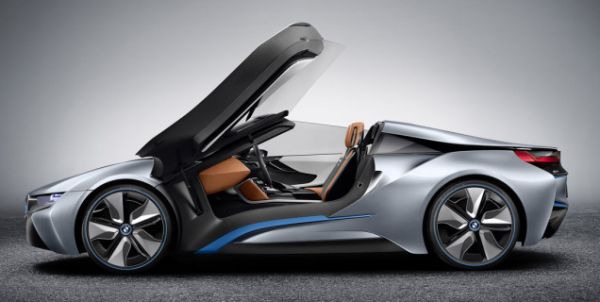 The 1.5-liter engine will be mated with a six-speed automatic transmission, while the electric motor will have a two-stage transmission. So, two drive modes will be offered to the driver, D and Sport mode. Also, there will be something called a Driving Experience Control Switch which will allow the driver to choose between ECO PRO and Comfort modes. The default mode is Comfort.

With fully charged batteries and a full tank of fuel, the i8 coupe can ride a range of up to 372 miles (on ECO PRO mode). As for the electric power only, the car can be driven about 22 miles. In the i8 coupe’s case, the petrol engine always needs to be prepared as a backup. To fully charge the batteries it needs about 3.5 hours on a 120-volt household plug.

How fast is the new BMW i8?

The BMW i8 Spyder should come with similar performance as the coupe. This model should be able to hit 60 mph in just 4.4 seconds, while its top speed should be 155 mph.

How much is the new BMW i8?

As for the price, since the coupe is available at $135.925, it can be asummed that the price for the BMW i8 Spyder would be slightly higher than the coupe’s. The fierce rivals will be: the Porsche 911 Carrera 4S and the Audi R8.
The BMW i8 Spyder will have a futuristic design, superior performance and will be mind-blowing for the hybrid car and acceptable overall range. Enough to fall in love with it. However, there won’t be back seats and its replacement parts can be very expensive.

It seems that Audi loves to jump over several steps instantaneously. Its offer of hybrid models fallen behind that of …

The Mirage is a small city car which has been around for quite some time. However, the 2016 model year …