When the MX5 has been first showcased to the public, Mazda announced that the car is in fact built in cooperation with Fiat which meant that the Italian manufacturer was also going to release a version of it. Well, a couple of weeks back at the Los Angeles Auto Show they released the all new 2017 Fiat 124 Spider which is one of the most surprising cars ever released by the Italian manufacturer. It uses the same platform as the MX5 but this is where most similarities end. Fiat did work quite a bit on the exterior as well as on its powertrain so the 124 will fell like an all new car.

At this point in time it is unclear if the car will be available on the US market but something tells us that it will. The price will likely be higher than that of the MX5 mostly because of its engine choice so expect the 124 to cost at least $26,000.

Just like with its close sibling, the 124 features 11 inch all wheel disc brakes and rear wheel drive as standard. However, it is around 100 pounds heavier than the MX5 because it is larger and it features a completely different engine which is a bit heavier than the 2 liter unit of the MX5.

The design of the 2017 Fiat 124 Spider is very impressive and it comes with quite a few references to the original Spider. The car is 5.5 inches longer than the MX5 overall but it shares the same wheelbase. The front end is more upright and a bit longer while the back has been lengthened by a small margin as well. In our opinion, the design of the front end of the car is not that European and we have to say that it does look a lot like the Dodge Dart which may also suggest that the car will be released on the US market as well. The back on the other hand seems to borrow some of the design cues of the Viper which is quite unusual for such a cheap car. Unlike the MX5, the 124 will come with 17 inch wheels as standard while 18 inch wheels will be available on the Abarth version which will also come with a hardtop instead of the usual manual soft-top as well as with a slightly more aggressive body-kit.

The interior on the other hand is identical to that of the MX5 and there are only minor changes such as the badge on the steering wheel or the upholstery’s color on the seats. It is similarly equipped to a top end version of the MX5 though so things such as air conditioning or satellite navigation will come as standard. 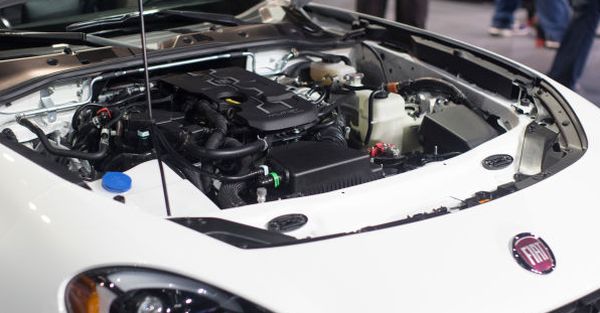 Engine wise, instead of either the 1.6 or 2 liter naturally aspirated Mazda engines, Fiat opted for a smaller 1.4 liter inline 4 which is turbocharged. This is the same unit found in the Abarth 500, so it makes an impressive 160 horsepower and 184 lb-ft of torque which is a hefty improvement over the 2 liter MX5. The official performance numbers are not out just yet but we expect the car to be at least a full second faster to 60 MPH than the MX5, despite the higher weight. On top of that, the car could be more efficient as well as nicer to drive thanks to the larger amount of torque available from as low as 2,000rpm. Just like with the MX5, the 2017 Fiat 124 Spider will come as standard with a 6 speed manual while a 6 speed automatic will be available as an option. This time around though, the manual has longer ratios so it will allow the 124 to cruise at higher speeds while using less fuel.

When BMW first shown its new i-brand car concepts, nobody could imagine that the concepts will become reality in such …