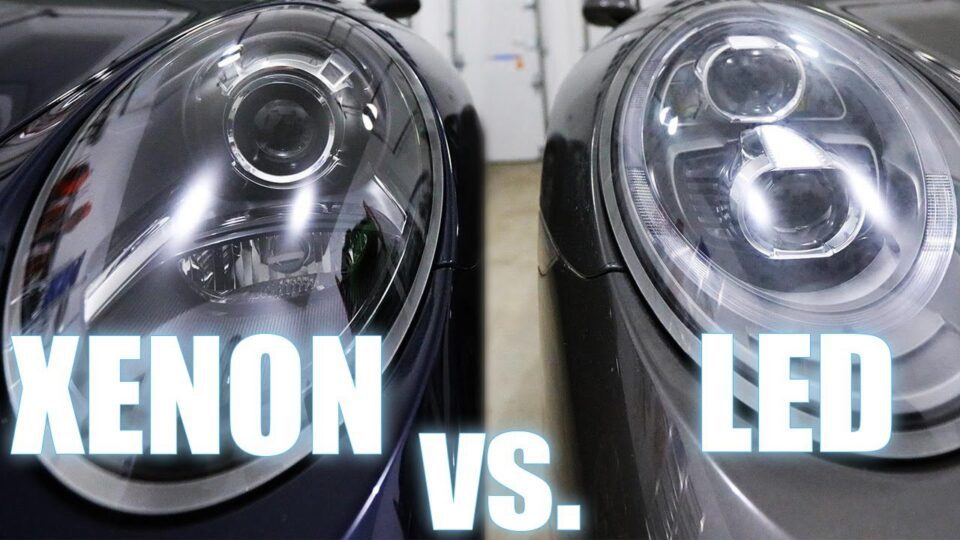 The various types of headlights that are now available on newer vehicles may make nighttime driving into a brilliant, if not blinding, light show. Halogen bulbs that normally warm and produce a yellow glow are quickly being replaced by light-emitting diodes (LED) or HID bulbs.

LED lights are also bright and white because they are packed with Xenon gas. The same goes for HID headlights bulbs (Xenon headlights)  that are packed with xenon gas as well. What distinguishes these two varieties of headlights?

LEDs have a characteristic white light and are brighter than halogen lights in automobile applications, however, they often aren’t as bright as xenon lights.

Engineers and designers of vehicles have more creative freedom because LEDs can be packed into small spaces and arranged in a variety of designs due to their small size.

LED headlights create light that is brighter and frequently has a wider beam pattern than other types of headlights by passing an electric current through a semiconductor (or diode).

Compared to incandescent bulbs, LEDs are around 90% more energy-efficient and produce less heat. Though they get dimmer with age, LEDs endure longer than halogen or xenon lights.

Because they consume less energy than other types of lights, these are also long-lasting and are increasingly cheaper to produce, LEDs are replacing other forms of headlights as the standard.

The bulbs of xenon high-intensity discharge headlights do not have filaments as halogen lights do, hence they typically last longer than halogens but not as long as LEDs. They consume more energy than LEDs and less than halogens. They also generate more heat than LEDs and gradually lose brightness.

Electric current is used in xenon headlights to form an arc between two electrodes, which emits brilliant white or bluish light that is frequently brighter than LEDs. In addition to white, aftermarket xenon lights are also offered in various blue and yellow hues.

Some xenon lights are so brilliant on dark roads that even the low beams might blind approaching motorists. When the lights are turned on, leveling devices are frequently used in vehicles with xenon lights to automatically adapt the beam pattern.

Initially exclusively accessible on luxury and expensive cars, LEDs and xenon lights are now more commonly used, especially LEDs. Some manufacturers have made LEDs a requirement for all of their ranges of reasonably cost vehicles. Although xenon lights are less common on new cars, they are still well-liked in the aftermarket.

One of the light bulbs that has been around for a while that uses Xenon gas is this one. The bulbs will be as brilliant as LED lights, and the best part is that this is just one unit while LED lights have numerous diodes.

Additionally, it should be noted that Xenon lights are preferred by manufacturers for two very important reasons.

In contrast to halogen lamps, which have filaments, this one has an electric arc, which will last longer than filaments that are more likely to blow.

Because Xenon Lights are so brilliant, they are also utilized in car headlights. The brightness has also started to cause problems because it is pointed upward and could annoy the driver in front of you.

High-speed cars are designed with Xenon Lights because they provide a larger range of view. As a result, when you first turn on the lightbulb, it uses more energy.

It is difficult to say because several factors affect headlight performance in addition to lighting type. There are many aspects that affect the performance like the shape of the headlight, the reflectors or projectors that focus the light down the road, etc LEDs typically beat all other types of test. Adding LEDs or xenon lights doesn’t guarantee a car will get the best rating or exceed halogen headlights.

In addition to Xenon lights, there are many types of LED lights available. Nowadays, the majority of Xenon lights outperform LEDs in terms of usage. Brooklyn Residents: What To Look For In a Car Accident Lawyer Why You Should Hire a Chauffeur Service for Your Wedding?