Alfa Romeo did not have a medium size executive offering on the market ever since the 159 has been discontinued from the market but a few months ago they released the final details about the successor of the 159. The car is the 2017 Alfa Romeo Giulia and it is the first rear wheel drive sedan built by Alfa Romeo in a very long time. The car uses an all new chassis which is also going to be used on a few other cars in their roster as well as probably a future sports sedan from Chrysler or even Dodge.

This new chassis is made mostly out of aluminum and high strength steel which means that not only the weight drops considerably but the car will also be a lot more rigid which translates in better handling and better NVH levels. The car has already been showcased a few months ago as well as at the LA Auto Show in its high performance trim level with the QV, or Quadrifoglio Verde, and it is expected to go on sale in the next few months with most of its engines available since launch. The price has been rumored to start at around $40,000 which is pretty much in the same price level with most of its competitors.

The design of the car is something new but it does resemble Alfa’s other cars which is fine considering that the 4C as well as the Giulietta are two of the best looking cars on the market today. The 2017 Alfa Romeo Giulia is a four door sedan and it seem that they decided not to release it as a touring model or even as a coupe. The front end is expressive with a similar grille to the 4C but the headlights are unique to it while the back of the car looks to have the flair of an Italian car. The QV comes with 18 inch wheels wrapped in high performance tires, a different aerodynamic kit as well as unique colors to it.

Unfortunately Alfa did not release any actual information when it comes to the interior of the new 2017 Alfa Romeo Giulia but from the QV concept car and from the cars which have been spied on the open roads it seems that the interior will be all new and it will not follow any current trends which is great because it gives Alfa a fresh start. The dashboard will likely be made out of soft touch materials, the steering wheel, seats and even the door covers will be wrapped in leather and the car will feature five seats, four of them looking quite comfortable. 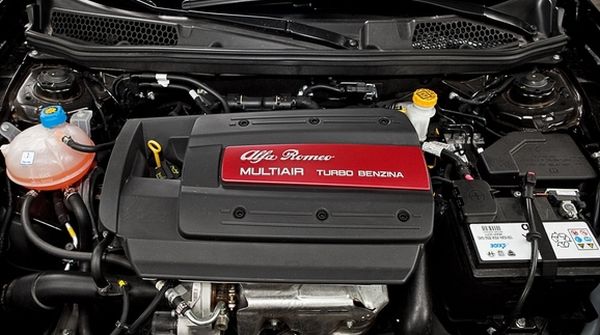 Engine wise, the 2017 Alfa Romeo Giulia will feature a few different engines and so far they only released information about two of them. The base car will feature a 2 liter turbocharged inline 4 petrol engine which will provide up to 276 horsepower and over 280 lb-ft of torque which will be mated to a 6 speed automatic driving the rear wheels. Options will include an all wheel drive system as well as a complex torque vectoring upgrade. Later down the road, the car will also receive a couple more engines with a 1.8 liter turbocharged inline 4 which will provide in the neighborhood of 200 horsepower. A diesel is also going to be made available which is expected to offer outputs between 160 and 240 horsepower.

The top of the range QV model of the car will come with a Ferrari developed 2.9 liter twin-turbocharged V6 which will develop up to 503 horsepower and 440 lb-ft of torque, allowing the car to get to 60 MPH in just 3.9 seconds and have a top speed of 191 MPH which is faster than any of its direct competitors.

The original Ford GT40 managed to beat the Ferrari of its time numerous times, so it remained in history as …