The original GT40 has been one of the most iconic Ford cars ever made because it was a car built for a reason, to outrun Ferrari at their own game. Nearly 60 years later, Ford decided that it might be the right time to make a special car just for that very reason, to give those European super-cars a run for their money. The 2016 Ford GT has been first released earlier this year and it is expected to go on sale by the mid of 2016. Unlike many other super-cars of today, the GT does not use a hybrid power-train which is a bit unusual. Instead, it uses a specially built EcoBoost unit which Ford will also race in the 24 Hours of LeMans and a few other iconic races.

The upcoming GT has been designed from scratch and it features the newest technologies Ford has to offer. The car is built mostly out of carbon fiber with a carbon fiber body shell and carbon fiber chassis but with a suspension system made out of aluminum. The price has not been disclosed just yet but it seems that the $150,000 price tag that many people rumored when the car launched is not true. In fact, Ford expects to sell the 2016 GT for at least $400,000 which is quite a steep climb from the original price. 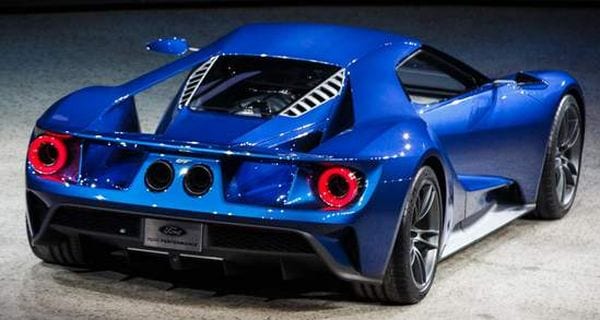 However, this price may be well worth it, especially since the car looks and feels amazing. The design of the 2016 Ford GT is quite impressive because it does not follow the standards of the industry. Instead, Ford built the car in a wind tunnel, so it features wing-like elements on the sides, a cockpit-like interior and active aerodynamics. The production car is also expected to get carbon fiber wheels, a slightly different rear section with an active spoiler as well as new mirrors. However, the two flying buttresses which not only feed the engine cold air, these also channel the air faster around the car in order to give it more downforce. 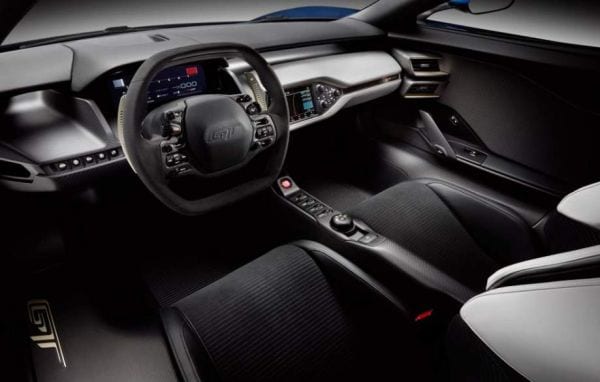 Inside the cabin on the other hand, the GT is quite simple in looks and equipment. The materials are just what you would expected from a super-car with leather seats and carbon fiber inserts while the equipment level is quite bare with only the minimum being offered. There is a climate control system, a navigation and infotainment system as well as power windows and mirrors. 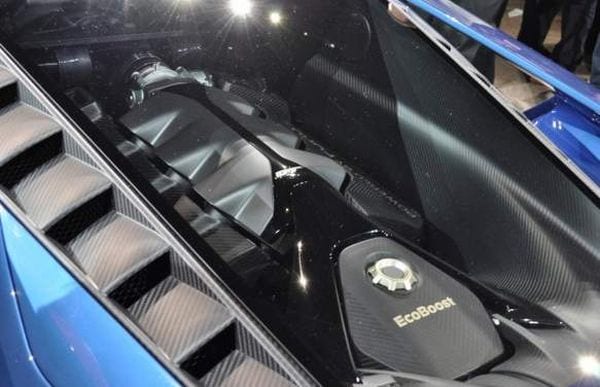 Under the rear deck there is one of the most impressive engines on the market today and even though Ford did not disclosed all the details about it, it seems that the 2016 Ford GT will get the same 3.5 liter V6 EcoBoost from their other cars. This time though, the engine went through major upgrades so the only shared part with the others is the engine block. Everything else is new and built to sustain a lot of pressure. The engine is twin-turbocharged, intercooled, it features direct injection and a modified Atkinson cycle which it will use during long distance cruising.

These upgrades are said to give the engine north of 600 horsepower and 600 lb-ft of torque which may not seem like too much but it is in fact very impressive, especially since the car is not a hybrid and it does not have the electric booster engines of its competitors. The GT uses a 7 speed dual-clutch semi-automatic gearbox with buttons on the center console and a set of paddle shifters on the steering wheel. The performance level is unknown but rumors say that the GT will get to 60 MPH in around 3 seconds and up to a maximum top speed of well over 200 MPH.

The Corolla is one of the cheapest car on the market today and despite that, it still offers a lot …

Even though it may not look like it, the Outlander Sport is Mitsubishi’s best selling model on the North American …